Drawing on recognizable human and natural forms, Manuel Izquierdo brought a distinctly modern and abstract vision to his artmaking. His visual language flowed gracefully from two to three dimensional forms. Iconic females, flower and plant forms, warrior men and myriad other themes can be found in sculpture and two-dimensional works alike. This exhibition will feature a distinctive selection of pastel and collaged works on paper, as well as a grouping of woodcut prints and small sculptures of various media.

Originally from Spain, but a long-time Portland icon, Manuel Izquierdo passed away in 2009. 2013 will see a major retrospective of his work at the Hallie Ford Museum of Art in Salem, Oregon, accompanied by an extensive catalog. Izquierdo was born in Madrid in the 1920s, and came to the United States as a teenager, settling in Portland, Oregon. While in high school in Portland, he was encouraged to pursue woodcuts by well-known calligrapher Lloyd Reynolds. In 1951, he graduated from the Museum Art School (now Pacific Northwest College of Art), and soon after became a professor there. Inspired by trends in art such as Abstract Expressionism, Cubism, and Realism, Izquierdo channeled much of his energy into sculpture and printmaking. He received the Oregon Governor’s Award in 1991 and has exhibited work both in the Northwest and nationally. He was honored with a ten year retrospective at the Portland Art Museum in 1967. His sculpture can be seen in a variety of Portland public places, such as The Dreamer in Pettygrove Square. His work is in collections including the Metropolitan Museum of Art in New York, the Philadelphia Museum in Pennsylvania; in Oregon at the Hallie Ford Museum of Art, the Jordan D. Schnitzer Museum of Art at the University of Oregon in Eugene, and the Portland Art Museum, and in Washington at the Seattle and Tacoma Art Museums, the Henry Gallery at the University of Washington, and the Museum of Northwest Art in La Conner. 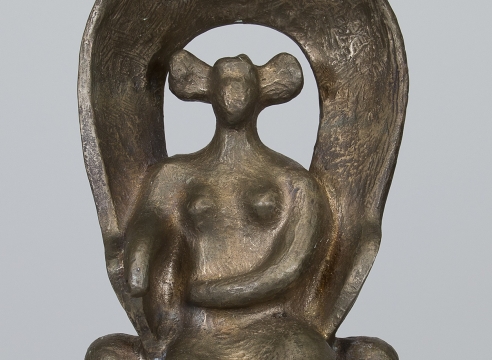