The gallery shows a selection of oil paintings and prints by the late William Givler (1908-2000), an artist and mentor who helped shape the visual arts community in Oregon. An early regional modernist, Givler depicts both human figures and a range of landscapes with dramatic gestures and a striking sense of color. Many of these paintings will show familiar coastal, Willamette Valley or Cascade mountain views, for which Givler was especially well known. The artist once said, "Much of the motivation for what I have done stems from the country around me." His images contain a lyricism that echoes the color and movement of what he portrays whether it is a landscape of the Oregon coast or an intimate depiction of conversing figures.

William Givler recorded the essence of the Northwest landscape through his paintings and prints for over 50 years. He studied at the Museum Art School (now the Pacific Northwest College of Art) in Portland, Oregon in 1926 and at the Art Student's League in New York in 1928. After Givler returned to Portland he became Dean of the Museum Art School from 1944 until 1973. Givler's work contains figurative images as well as portraits of the landscape. The artist was given a print retrospective at the Portland Art Museum in 1994, and has exhibited work at the Whitney Museum of Art and the Metropolitan Museum of Art, New York; the Philadelphia Museum of Art, Pennsylvania; and the Seattle Art Museum, Washington. His work is in collections worldwide, including the Portland and Seattle Art Museums; the Boston Public Library, Massachusetts; Biblioteque Nationale, Paris, France; and the Victoria and Albert Museum, London, England. 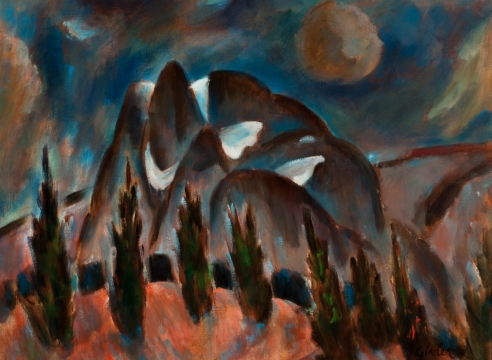