This exhibition of work by Margot Voorhies Thompson, entitled Inventing/Adapting looks at the relationships between calligraphic forms and language. Similar to nature, language has the ability to reinvent itself and adapt over time, or run to extinction. Through adaptation, the meaning of our words change. Thompson takes language and explores these changes by reinterpreting its meaning through form. The artist creates her own vernacular alphabet. She abstractly collages and layers the painting’s surface with calligraphy. The words are undecipherable and her unique idiom expresses the lyrical form rather than the symbolism. She deconstructs the alphabet literally by breaking up the letters into abstract elements. The compositions become personal palimpsests that hide any literal meanings within. This reinvention of letterforms and texts into graceful abstraction links her imagery to an archaic mysticism. It communicates something ancient and elemental, before words. Here, by shaking up its familiar symbolism, the artist questions the uniform and universal use of language.

A Portland native, Margot Voorhies Thompson studied at Lewis and Clark College, Reed College, the Pacific Northwest College of Art, and at the Hocheschule Fur Kunsterlische in Linz, Austria. Her work is in collections including the Portland Art Museum, the Stanford University Hospital, and the Printmaking Workshop in New York. Margot Thompson has completed several collaborative book commissions with Kim Stafford, Pattian Rogers, and Wendell Berry for the University of Oregon’s Knight Library Press. Other recent commissions include pieces for Oregon University of Health and Sciences, Portland; Portland State University; Kaiser Permanente, Tualatin, OR; the Woodstock Branch Multnomah County Library; and Doernbecher Children’s Hospital, both in Portland. 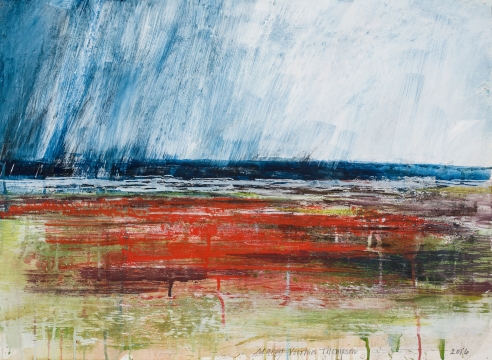