Portland artist Jay Backstrand has an amazing eye for the unusual. His paintings juxtapose disparate and mysterious elements, which arouse enigmatic intrigue. Over the years Backstrand has developed a library of images he employs that run the gamut from art historical to the odd and unlikely, such as a painting by Gustave Courbet, a plastic Japanese toy, or knotted rope. As assemblages his paintings trigger historical and referential allusions, which in turn reflect a contemporary commentary. By activating such a diverse range of cultural imagery, the artist astutely reveals irony and prophetic meaning, pulling the viewer into a distinctive and multivalent narrative.

An Oregon native, Jay Backstrand studied at the Pacific Northwest College of Art and at the Slade School in London as a Fulbright fellow. He has exhibited his work since the 1960s and from 1975 to 1986, taught art at PNCA. In 1984 he was honored with a 10-year retrospective at Marylhurst College, OR. His work is included in the collections of the National Gallery, Washington, DC; the Oxford University Press Print Collection, England; the Portland Art Museum; the Seattle Art Museum; the Tacoma Art Museum; the Henry Gallery at University of Washington; the Bellevue Art Museum; Denver Art Museum; and Hallie Ford Museum of Art at Willamette University, Salem, OR. Awards include an NEA grant, an Oregon Arts Foundation grant, and a Smithsonian Institute purchase award. His painting is included in the Eighth Northwest Biennial at Tacoma Art Museum, which runs until May 6, 2007. 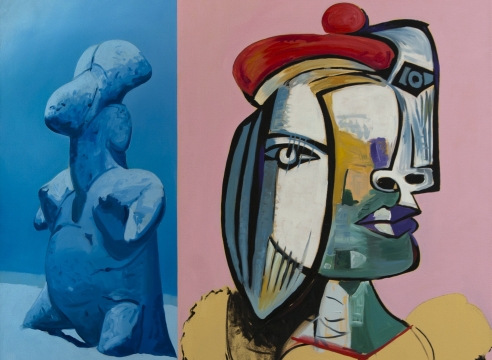