Portland artist, Jackie Johnson boldly paints totemic forms with vibrant colors. In this exhibition entitled “Water, Quakes and War,” compositional shapes, some triangular and egg shaped, others tree or brick-like, are informed by current events, architecture, the figure, and nature. Her explorations of composition are approached anew each time. They transpire within a spatial, floating developmental process. Johnson reveals metaphor and character throughout her work by reinventing form. Ideas of perception are reconsidered, the elements become iconic and primal, as the totemic shapes appear to shift and jostle about the canvas. Enigmatic images, they are left to the viewer’s own interpretation.

A native of Oregon and a graduate of the Pacific Northwest College of Art, Jackie Johnson made New York City her home from 1978 to 1993 where she worked and exhibited her paintings. She has been included in a number of gallery and museum invitationals such as the Blair Art Museum and the Johnstown Art Museum in Pennsylvania, the Academy of Art in Easton, Maryland, the Ward Nasse Gallery, and 55 Mercer Street Gallery in New York. Jackie Johnson currently resides in Portland. 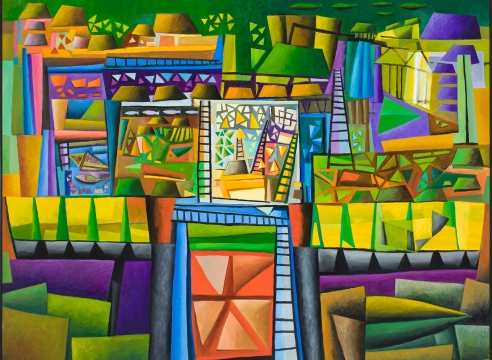