I Won't Be Wronged

A Matter of Vocation

They Call Me Lula

Gregory Grenon’s We Are Still Here features Grenon's portrait-like images, frequently of women, in a range of expressive moments that are vivid, powerful and often provocative. One of the long recognized artists in the Northwest, Grenon works as a colorist exploring the dynamic and expressive qualities of the people he paints, and celebrating the strength of his bold subjects. He paints directly on the reverse side of glass, a technique he discovered on his own, but which is also steeped in Russian folk tradition.

Gregory Grenon grew up in Detroit where he studied at the Center for Creative Studies. After working for a time in Chicago, where he furthered his printmaking skills at Landfall Press, he moved to the Pacific Northwest in the 1970s. Throughout his career, he has had one-person exhibitions throughout the region as well as in New York, Chicago, Boston and New Orleans. He has received fellowships from the National Endowment for the Arts and the Oregon Arts Commission. His work is in numerous private and public collections including the Hallie Ford Museum of Art, Willamette University, Salem, OR; the Portland Art Museum, Portland, OR; the Seattle Art Museum, Seattle, WA; the Tacoma Art Museum, Tacoma, WA; the Boise Art Museum, Boise, ID; and New York Public Library, New York, NY. 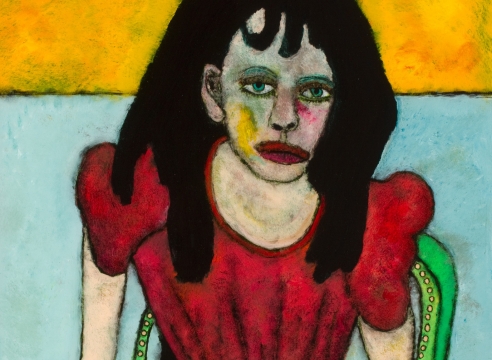 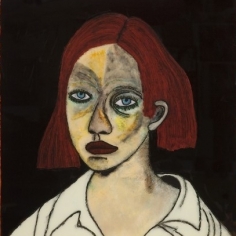 Gregory Grenon’s paintings at Laura Russo are another kind of familiar-yet-different. These are not quiet understated paintings. They are bold colorful people painted in reverse on glass. They seem like people you might know. They are portrait-like, but painted “expressionistically.” Eyes are big, lips are plump, ears tend to be simple thick C-shapes. Strong outlines tie everything together.