We are pleased to present new paintings by the well-known Seattle artist, Fay Jones. She paints playful and provocative images using a rich and eclectic vocabulary filled with a variety of characters. Influenced by her roots in surrealism and growing up surrounded by poets and writers, her subject matter alludes to comical and unpredictable narratives. Instead of finding meaning through word association, she develops meaning by provoking visual associations. Her imagery is symbolist, dreamlike. Her intuitive approach directs the viewer into ambiguity to consider juxtaposition and plot, while expressing the most ethereal of references. Dancing animals, definitive hand gestures, simplified faces, specific colors all come together in a palimpsest of pictorial poetry.

Born in Boston, Massachusetts, Fay Jones received a BFA from the Rhode Island School of Design in 1957. Although influenced early on by Philip Guston, Jones has always painted from her own observations of modern life. In 2006, she received the Seattle Art Museum’s Poncho Artist of the Year award, and also received grants from the NEA in 1983 and 1990, the Washington State Arts Commission in 1984, and La Napoli Art Foundation in 1989. Her work has been extensively collected in the Northwest. Exhibitions include a 2007 retrospective at the Hallie Ford Museum of Art at Willamette University, a 1997 traveling retrospective with the Boise Art Museum, and exhibitions at the Portland Art Museum, the Seattle Art Museum, the Museum of Northwest Art in La Conner, WA, the Anchorage Museum of History and Art, and the Palm Springs Desert Museum in California. 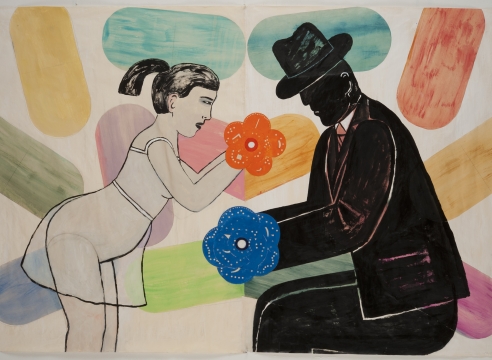