Richard Royal, a native of the Northwest and resident of Seattle, is recognized internationally as one of the most skilled and talented glassblowers in the studio glass movement. Richard’s artistic approach combines boldness with a sensual fluidity, creating graceful pieces that express their own sculptural elegance. His sensitivity and natural affinity towards the material reveal themselves within his extensive body of work. He worked as a hot glass sculptor in the late 70s at the Pilchuck Glass School and went on to assist Dale Chihuly soon after. He now works from his own studio full time. Royal was one of the first Artists-in-Residences at the Waterford Crystal Factory in Ireland. His work is included in public and private collections internationally including the Mint Museum, Charlotte, NC; the High Museum, Atlanta, GA; the New Orleans Museum of Art, LA; the Tampa Museum of Art, FL; and the Daiichi Museum, Nagoya, Japan.

Washington glass artist David Schwarz is fascinated with the use of optics and perspective. His blown and cut glass orbs reflect and refract mysterious and beautiful shapes and colors. His illusionary play of form lets us into a private and intimate kaleidoscopic space. Scientific and organic in their essence, these jewel like, weighty forms mesmerize and seduce in their presence. Born in Vancouver, WA in 1952, David Schwarz received a Masters in Science/Glass from Illinois State University in the early 1980s. From 1979 to 1986, he taught at the Pilchuck Glass School while developing his distinctive style. Since that time, Schwarz has been a full time artist working at his studio in Ridgefield, WA. His work is included in such collections as Corning Museum of Glass, NY; Milwaukee Museum of Art, WI; Smithsonian Museum of American Art, Washington DC; the High Museum, Atlanta, GA; and the Hunter Museum of Art, Chattanooga, TN. He has shown his sculpture in solo exhibitions both nationally and internationally since 1980. 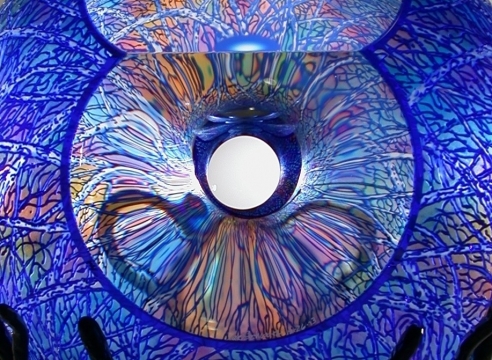